Jamie Hall’s 2007 aerial photos are presented at medium size (526×350), so each image will load quickly, even using a slowdial-up connection to the internet. High resolution images are available on request.

Ken Adelman’s 2007 aerial photos and his 2005 aerial photosare also presented at medium size (640×420); several larger sizes are available on his website as well.

If you have a high-speed broadband connection, you can view Adelman’s 2007 photos via Google Earth, which shows the precise location of each image on an interactive satellite map. 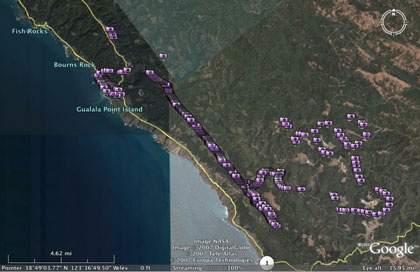 How the flight was organized

We contacted LightHawk, a nonprofit organization with volunteer pilots around the country who take environmental organizations up for aerial photography. LightHawk had arranged two flights over the Gualala River watershed for FoGR in past years. 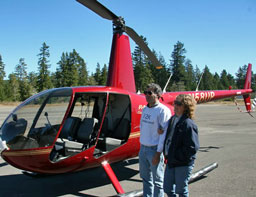 At first there were no pilots available, but then a LightHawk volunteer called to say that a team had volunteered; he said he thought it was a helicopter and that the husband took photos. This turned out to be Gabrielle and Ken Adelman, the couple who created the California Coastal Records Project, with whom we flew two years ago.

On Monday, October 8, 2007, Gabrielle and Ken Adelman arrived at the Gualala Airport in their Robinson R44 helicopter just before 11:00 a.m. The four of us loaded up, Gabrielle flying the helicopter, Ken in the left front seat taking photos with his Nikon digital camera, which is linked to the GPS unit. Peter Baye was in the right rear, and Jamie Hall was in the left rear with his camera; both left doors were off.

We headed south along the North Fork Gualala River past an herbicided area (photos 6387-6388 JH) and Elk Prairie (Photos 6389 & 6390 JH). Ken took photos continuously at a set focal length and Jamie took closeup photos and overall shots of the same areas, with Peter giving a running account of the flora and hydrological processes and pointing out features to get specific photos. 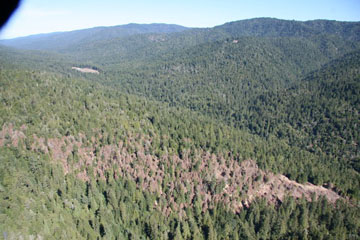 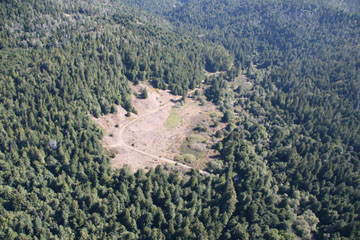 The first gravel mining site was #100 (photos 6418-6427 JH and 5782-5796 KA). Site numbers are designated by the gravel company and marked on a map in the Mitigated Negative Declaration document. We photographed the flat, almost featureless expanse of gravel left by the gravel mining operation, which had changed little from its last excavation date due to the lack of high water flow last winter. 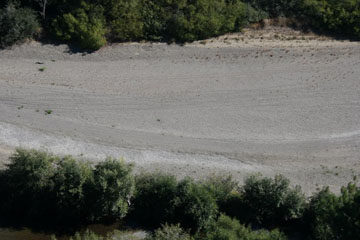 We proceeded down the river past old clearcuts, the first of which had recently had the conifers thinned (photos 6484-6486 JH) and associated gravel deposition at the base of these features (photos 6484-6490 JHand 6501-6524 JH). 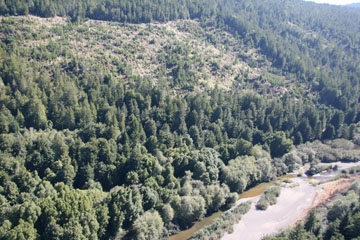 gravel deposition at the base of an old clearcut (6504 JH) 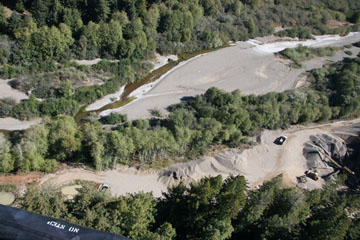 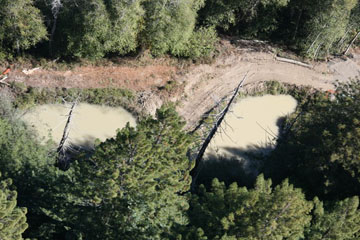 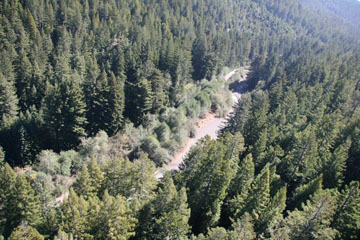 From there we headed back up to Valley Crossing and eastward on the Wheatfield fork. At this point Peter points out the willow cover just east of Valley Crossing (photos 6672-6677 JH and6091-6100 KA), which catches gravel and woody debris creating a more complex channel with better pools. 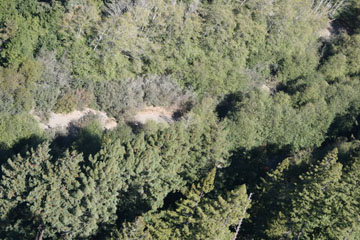 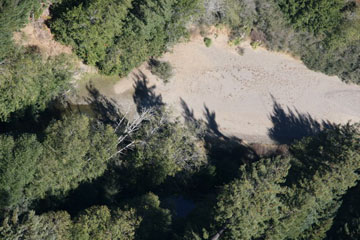 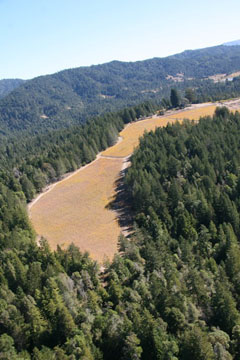 Next we photographed the Putnam / Bryce Jones vineyards at the old hollow tree store / mill site. This site shows recent activity compared to our 2005 flight, a large new addition to the existing vineyard acreage and a very large reservoir were added in the last year, (photos 6739-6765 JH and 6170-6183 KA). 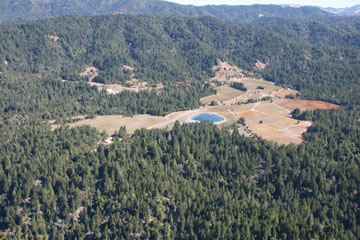 Bryce Jones (Baldy) was next (photos 6769-6779 JH and 6186-6189 KA). The changes compared to previous flights are obvious. New vineyard areas on the north side and center of this vineyard have been developed in the last few years; there is also a small mill site adjacent to the area that burned in 2005. The Artesa property can be seen in the background of these photos. 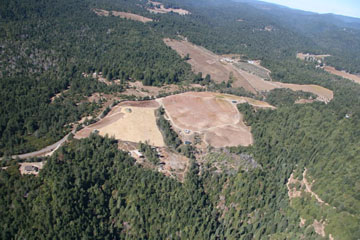 The Campbell vineyard was next, recent activity on the east side of this property can be clearly seen, several acres of clearcut which we photographed in progress in 2005. (Photos 6780-6797 JH and 6190-6202 KA) 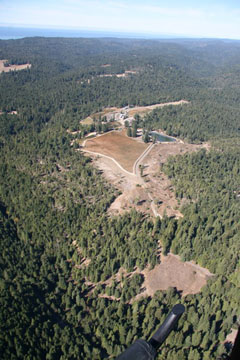 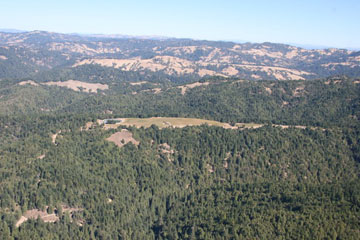 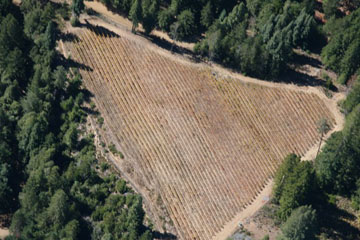 From there we headed back to Gualala where we photographed the main stem of the Gualala River and the estuary extensively (photos 6872-6961 JH and 6227-6292 KA). Peter noted that we could see the algae and plant covered rocks on the bottom. 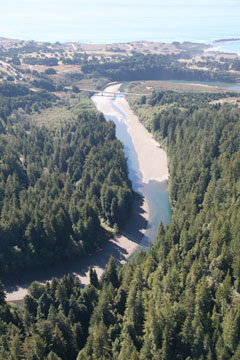 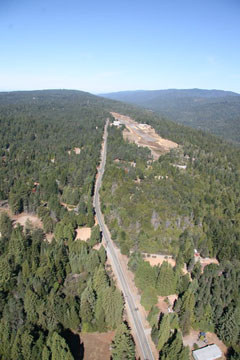 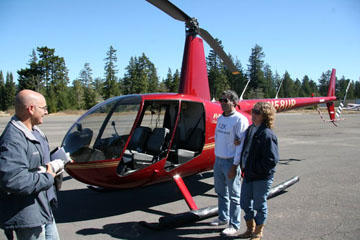 Gravel mining proceeded in 2005 and 2006 without County or federal permits; applications for permits are being reviewed by regulatory agencies in the fall of 2007.

One of the most obvious at-a-glace features seen in the aerial photos is that most gravel bars are either covered with or bordered by mature willow, alder, and torrent sedge (riparian vegetation), EXCEPT the regularly mined areas that perpetuate gravel barrens. 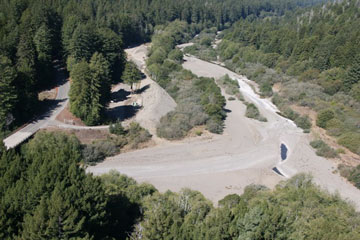 These perpetually devegetated bars are like open solar heating panels, and remain so low and flat that high flows spread out over them instead of confining their scouring to the main stem (thalweg, single-thread channel). 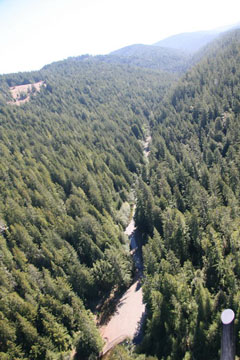 Dense riparian woodland canopies on bars help trap the cool night air that flows down canyons. The canopies also keep the ground cool, so water flowing below the gravel bed doesn’t heat up under riparian shade.

The mature riparian woodlands on bars are able to trigger log jams and debris jams, and trap sediment (including fine sediment), pulling it out of the active channel and stabilizing it. In contrast, mining the bars removes the coarse upper “armor” layer that traps finer silt and sand below it, in the pores (interstices) of gravels, and releases it for transport during floods.