The Gualala River Park Coalition, a grassroots environmental organization, has collected more than 1,100 signatures from people who would rather turn the Gualala River floodplain into a public park than see its redwoods logged by its current owner, according to Kathleen Chasey, who is a member of the Coalition. The petition can be found at http://gualalariverpark.org.

Chasey said the impetus behind the Coalition is to demonstrate strong public and political support for the creation of a river park, support that can translate into conservancy acquisition once a willing seller can be persuaded.

On June 6, representatives of the Coalition will present their proposal for the park to the Gualala Municipal Advisory Council. According to Chasey, the organization has asked the GMAC to endorse their “vision of the park.”

A separate petition that directly opposes the Dogwood timber harvest plan along the same stretch of river, has collected 3,000 signatures. It is sponsored by naturalists Jeanne and Rick Jackson. It can be accessed at tinyurl.com/ico6-03-19.

There is no way to tell how many persons signed both petitions, but the numbers are nevertheless significant, given that the population of postal code 95445, which includes Gualala, is 1,930 people.

Since 2015, Gualala Redwood Timber, LLC has submitted three versions of its Dogwood timber harvest plan. The first two were approved by Cal Fire over significant public objection and protest, but the Superior Court of Santa Rosa rejected both plans in response to a lawsuit spearheaded by Friends of the Gualala River, a local conservation organization.

The Court said Cal Fire failed to assess the cumulative environmental impacts of the Dogwood timber harvest plan on the Gualala River and its watershed as required by the California Environmental Quality Act, and that the plan reached a conclusion of “no impact” without evidence or accounting for other effects from past and future logging of the land and water uses. Moreover, the plan did not adequately address alternative non-timber uses of the land or the possibility of a conservation easement.

While the Gualala River Park Coalition is focused primarily on creating a public park along the river, its members have at times taken exception to what some see as a key misrepresentation in the third Dogwood plan. That plan states, “A sale of the THP area as a non-timber producing use is highly speculative” and “Because this alternative is remote and speculative, the conservation easement and public land purchase alternatives were rejected for further consideration.”

But in a letter to the California Department of Forestry and Fire Protection, Chasey said that three years ago, a consortium of environmental groups, foundations, and public agencies reportedly offered $60 million to purchase the 29,022 acre timber holdings of Gualala Redwoods Inc., the previous owner, including the acreage along the river floodplain that could become the Gualala River Park. The company rejected the conservation offer in favor of a $52 million offer from Gualala Redwood Timber, the present owner.

The creation of a Gualala River park has been a feature of Sonoma County planning since the 1950s and is included in the current plan as one of the top five possible park projects.

In addition, Chasey said, the Mill Bend Coalition recently found a conservation buyer to protect land at the Gualala River estuary. That land is adjacent both to the Gualala Point Regional Park in Sonoma County and the site of the proposed Dogwood harvest portion in Mendocino County. She said both the $60 million offer by conservationists to buy the land in 2015 and the offer by conservation organizations to buy the Mill Bend property, now in escrow, is prima facie evidence that a “non-timber producing use” including conservation of the land is not “highly speculative.”

Over 100 people submitted public comments in opposition to the Dogwood III proposal. Many of these comments extol the natural beauty of the Gualala River floodplain. But many also cite substantive reasons the plan should not be allowed to proceed. These include destruction of the river ecosystem as well as the documented presence of species designated for protection by state and federal agencies.

According naturalist Jeanne Jackson, these include the California red-legged frog, which is on the federal list of threatened species, and the western pond turtle, another floodplain inhabitant, listed as a “species of special concern” by the California Department of Fish and Wildlife. Other threatened species, Jackson said, include the foothill yellow-legged frog, and a variety of rare plants such as fringed corn lilies and coast lilies that can still be found in the Gualala River floodplain. The Gualala roach, she said, is a minnow that is only found in the Gualala River.

Cal Fire has not yet made public a decision to approve or reject the third Dogwood proposal. But according to Dave Jordan, a former board member of Friends of the Gualala River, the plan is likely to be approved. “Cal Fire gets about 1,200 timber harvest plans a year,” said Jordan, “and of those, they approve just about 1,200. They say their goal is to work with the land owners, and if they find a deficiency in a timber plan, they find a way to fix the flaws. Cal Fire has been captured by the industry.”

If the third Dogwood plan is approved, it will almost certainly face another court challenge. “We will file a third lawsuit the day after Cal Fire approves the Dogwood timber harvest plan, if it does,” said Charles Ivor, President of Friends of the Gualala River.

According to Ivor, Gualala Redwood Timber has submitted three different timber harvest plans, all of them in the Gualala River floodplain, known as Dogwood, Little, and Hazel. “Gualala Redwood may be planning to introduce one small acreage plan after another until the floodplain is completely logged,” he said, “They will continue applying in the future because that’s where the money is.”

He said such a strategy would “devastate the ecology of the river,” and that of all the rivers flowing to the ocean on the north coast of California. “The Gualala River is the only one that is not protected from logging in one way or another.”

Ivor is a big-picture guy. “All coastal streams and rivers—the Russian River, Gualala, Navarro, Alder Creek, the Big and Little Rivers, Garcia and the rest all flow into the ocean, to the Greater Farallones National Marine Sanctuary.”

He said the fish from the rivers constitute one section of a food chain that goes from the salmon and steelhead to the harbor seals and the killer whales and involves numerous other species. “Because of environmental damage,” Ivor said, “the seals and whales have to go further out to find food. So, we don’t see them as much anymore.” It’s all part of one ecosystem, he said. “If you destroy the river-spawning habitat by logging, then it sets up a disastrous chain reaction way into the ocean.” 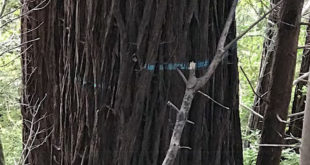 Protecting Endangered Species:
The Case for a Preliminary Injunction